The Variel Achieves Another Milestone With Opening Of The Discovery Center

Those who are interested can now get ‘a glimpse’ of the inspired lifestyle and the comfortable, contemporary living environment The Variel will offer.

On the morning of Wednesday, January 27, a small group of people who have been intimately involved in the planning and development of The Variel gathered with local officials for a ribbon-cutting ceremony to mark the grand opening of The Discovery Center.

Located across the street from The Variel at 6160 Variel Avenue, The Discovery Center was established to showcase The Variel’s contemporary and upscale design, a living environment created specifically to appeal to active, independent seniors in the Warner Center and Woodland Hills area.

The ceremony was held indoors, with social distancing guidelines enforced, and was streamed live on The Variel’s Facebook page for others who wanted to attend the event virtually. 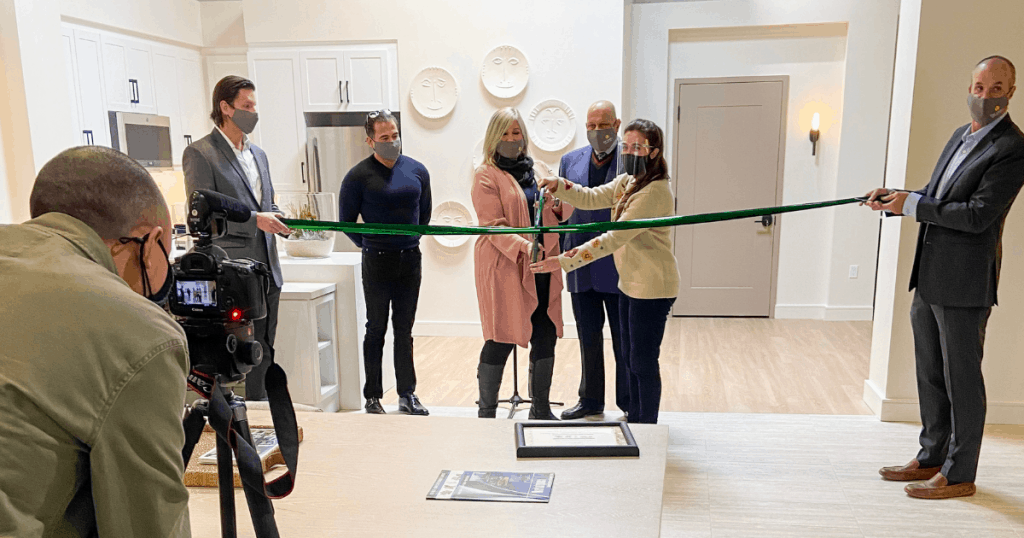 Adam Arnold, a senior development manager at South Bay Partners, the company responsible for developing The Variel, served as the master of ceremonies.

Arnold then introduced Rodrigo Vargas, principal of Rodrigo Vargas Design, the award-winning firm chosen to create the interior design of The Variel. Vargas, who also designed The Discovery Center with his team, noted that their goal is “to capture the comfort of Southern California living: casual, elegant, light and airy.”

The Variel, Vargas said, will be “a dialogue between indoor and outdoor living,” noting that it’s about “finding a place where you can be quiet and active at the same time. … What you see at The Discovery Center is just a glimpse of what you will see at The Variel.”

“Warner Center is one of the fastest-growing areas anywhere in the city, and to see senior living represented in that growth is really thrilling and exciting,” Vos said.

Dennis Zine, a former councilman and the honorary mayor of Woodland Hills, represented the West Valley Warner Center Chamber of Commerce board of directors at the event.

“The senior population is growing,” Zine said, “and they need a place that’s comfortable, that gives them the lifestyle that they wish for. … That’s what [The Variel] is going to provide for people.”

If you missed the streaming video on Facebook or would like to see the ceremony again, you can watch this professionally recorded video or view below.

At The Halfway Point

The Discovery Center’s grand opening comes almost exactly a year after The Variel’s groundbreaking ceremony. At the ribbon-cutting event, Adam Arnold remarked about the tremendous progress that has occurred in the past year, and Dennis Zine likened it to watching a newborn grow up.

W.E. O’Neil Construction has indeed done a fantastic job of keeping the project on track, and we look forward to welcoming the first residents to The Variel in the spring of 2022.

While construction continues, we are welcoming visitors to The Discovery Center to learn more about this beautiful, brand-new community and the VIP Program at The Variel. To arrange a one-on-one visit* with a member of our sales team, call (818) 651-0168.

*Your safety is our top priority. We are following all California guidelines for COVID-19. We are only permitted to have a certain number of people in the Discovery Center at any given time, so please call ahead to schedule an appointment. Or, for a walk-in visit, we ask that you call from the parking lot to ensure that space is available for safe entry. Face masks are required.

Accept All
California Residents: We collect personal information subject to the California Consumer Privacy Act. Learn more.By using this website, you agree to our use of cookies, including cookies used for our marketing efforts. Learn more.
×

This website uses cookies to improve your experience while you navigate through the website. Out of these, the cookies that are categorized as necessary are stored on your browser as they are essential for the working of basic functionalities of the website. We also use third-party cookies that help us analyze and understand how you use this website. These cookies will be stored in your browser only with your consent. You also have the option to opt-out of these cookies. But opting out of some of these cookies may affect your browsing experience.
Necessary Always Enabled
Necessary cookies are absolutely essential for the website to function properly. These cookies ensure basic functionalities and security features of the website, anonymously.
Functional
Functional cookies help to perform certain functionalities like sharing the content of the website on social media platforms, collect feedbacks, and other third-party features.
Performance
Performance cookies are used to understand and analyze the key performance indexes of the website which helps in delivering a better user experience for the visitors.
Analytics
Analytical cookies are used to understand how visitors interact with the website. These cookies help provide information on metrics the number of visitors, bounce rate, traffic source, etc.
Advertisement
Advertisement cookies are used to provide visitors with relevant ads and marketing campaigns. These cookies track visitors across websites and collect information to provide customized ads.
Others
Other uncategorized cookies are those that are being analyzed and have not been classified into a category as yet.
SAVE & ACCEPT